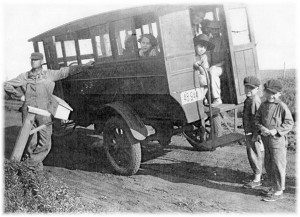 The town of Piedmont was originally homesteaded by Mr. James Dean, who had made the Unassigned Land Run of April 22, 1889. After his death in 1899, the farm became the property of Dr. E.H. Long, who was both a doctor and attorney. In 1903, Dr. Long had a quarter-section of land laid out for a townsite.

Despite the initial flurry of activity in 1903, the town prospered with the coming of the St. Louis-El Reno-Western Railroad in 1904. At that time, lots were auctioned along the railroad right-of-way. The first train arrived in Piedmont on New Year’s Day, 1904. After Piedmont was established, a larger school was needed. In 1905, a two-story, four-room school was built in town. The Starr School building, established in 1893, located south of NW 150th on Highway 4, was then abandoned and sold.

On Saturday, November 19, 1907, President Roosevelt signed the Statehood Proclamation at 10:17 a.m. Oklahoma was now the 46th State of the Union with the power to make her own laws. In 1909, the town of Piedmont was incorporated.

In May, 1920, residents of the Piedmont, Bell, Diamond, and Kansas school districts voted to consolidate so that the district was large enough to support a four- year high school. The Bell Schoolhouse was moved next to the two-story Piedmont building. Classes were also held in the Baptist and Christian Churches, as well as the city jail. The Pleasant View and Mathewson districts consolidated with the Piedmont School District in 1921. On New Year’s Eve, 1921, construction started on a nine-room, brick building located ½ mile north of the old school.

From 1950 through 1970, the population of Piedmont increased by 124%. Despite the fact that population growth amounted to a total of 149 persons over a twenty-year period, and the general economy, especially the agricultural sector, was in a recession, Piedmont residents supported their schools. The Head, Pleasant Hill, and parts of the Racine, Harmony, Texas, and Scott School districts were annexed into Piedmont in 1948. A part of the Richland district was folded into Piedmont in 1957. The 1921 school building got a face-lift in 1943 with the addition of indoor restrooms and locker rooms with showers. A cafeteria was added in 1953; a new gym was constructed in ’55; a brick teacherage was constructed in ’59; and an elementary building was built in 1964.

In the 1980’s, Piedmont continued to grow, though not at the dramatic rate it experienced during the 70’s. On the side of growth, the district added a junior high in ’82, and a junior high addition and a fifth and sixth grade building in ’84. Residents also adopted a City Charter in 1984. A four-lane highway, State Highway 4, was constructed in 1987.